A New Age - Interactive GoT Story 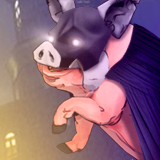 After reading a lot of fantastic fanfiction on this forum, I decided to make on myself. I really hope that you will like mine as well.

I will also apologise for my grammar here, I will try my best to have as few grammar-wrongs as possible in the story, but here it might be a bit clumsy.

Anyways, the story is set roughly 60 years after the ending of season 6, Westeros is divided into 3 different parts, the South (Dorne, The Stormlands, The Reach, The Crownlands and The Westerlands, ruled by the Targaryens), the North (The Vale, The North and The North beyond the North, ruled by the Starks) and the Rebels (The Riverlands and The Iron Islands, led by the Greyjoys). Then we also have Essos of course, who stand united behind Braavos' Iron Bank. How they succeeded to unite Essos might be explained later on in the story. And of course, Asshai, led by... the red god?!?

The Story will, in the beginning, have 2 P.o.V, one in the North and one in the south. As time passes by we will, of course, get more P.o.V, maybe even just your character.

In the North, we will follow House Beartilde, a minor house, yet very close to the king. The P.o.V's name is Barney Beartilde, who is fighting alongside his father, Bernhard Beartilde and his king, Robert Stark when the story begins.

In the South, we will follow Catelyn Beartilde, a handmaiden to the Queen and little sister to Barney. She is travelling back to King's Landing with the Queen + Handmaidens after a visit to Highgarden when the story begins.

Anyways, after that I translate them, and then I go through it all to check for grammatical errors that I might find.
4. Enjoy!

Here is a picture of about how it looks now in Westeros (Please bear in mind that I made this in Paint.NET in about 5 minutes, so it's far from great:

Prologue: The Battle of Seagard [Finished]

Chapter IV: The Son of Ice and Fire [Coming quite soon]

Chapter V: The Wolf and the Dragon [Coming not so soon]

Epilogue V: Chaos is a Ladder [Coming quite far away]

Please feel free to send as many characters as you like.
https://docs.google.com/forms/d/1MOku6HL0YKZ6-NG0ra_gpbd7u2uFDfwuLrWUvxTI8j0/

Appendix (Please note that this is a very early stage of it, and far from complete)
https://docs.google.com/document/d/1HVsSugoGY3xS4UDmOB7U4tWG8vhIjEbQh0DhAnnSa6k/edit?usp=sharing

Mapping out which years Kings, Queens, Lords and Ladies ruled kingdoms and seats (Early stage, not yet complete)
https://docs.google.com/document/d/1xW9_CJkwB1YqxIpBqEedTKgVZzq8z_proDhmh0zl1pM/edit?usp=sharing

List of Characters: Bold ones are Point of View (P.o.V) Characters.

Oh, and yes characters will appear that appeared in the show/books, but no one is confirmed.

I hope you enjoy my story, and underneath here it will say when it's likely that I get my next part out/close votings.

Next Part should be up pretty soon