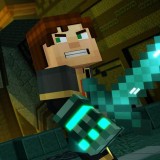 Hello everyone of the Telltale community!
I have found a great idea for a 3 - 5 episode season/extended pass, and it is all about Romeo, Xara, and Fred. These are my ideas for episodes:

Episode 1: Glitching in Confidence-
Romeo and the friends are spawned in, and they don't know what is to come, and they live in such a horrible environment, where everything is falling apart, and mobs are overtaking them, Romeo must find something to make everything stable.

Episode 2: Armed Cave
As nothing is stable, Romeo and friends stumble upon a cave, a cave that has nothing but craziness. Including something very dangerous, someone guarding the very mysterious object, Herobrine (because it was a glitch back in the day (no hate pls)

Episode 3: Mechanical Preference
Xara decides that nothing will work without mechanically taking it to the next level, and Xara is correct, she builds machines that create new things because of glitches, and finds something intriguing, a glitchy prismarine collossus, the gang battles the monster, and it looks like it fell into void.And the gang has to figure out what is causing this.

Episode 4: Outsmarting the Problems
Fred uses all the glitches found and teleports the friends to a mysterious place, and it looks like there, they can look around and see that the place has lots of settings, they stabilize the world and destroy Herobrine, and everything gets built, and everything goes well, until the friendship goes wrong, and everything unwinds.