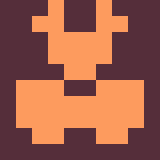 Foreword: This is not a super serious attempt at fanfic. This is just a fairly half assed attempt at providing a small amount of closure for Kenny's story if Clem stayed in Wellington.

As Kenny continued walking and Wellington shrank into the distance behind him, he found himself at a loss for what to do. He had lost everything, his wife, his son, Sarita, Clem, AJ... he was truly alone. He didn't have a reason to continue living, yet he didn't want to die, partly because of his survival instincts, but also because he knew Katjaa and Sarita both would disappointed in him if he just gave up, so he kept walking in a random direction, no plan other than to keep moving.

As he moved on, he crossed paths with several walkers that were essentially frozen in place. The cold weather had all but solidified them. He had seen first hand how the cold affected the walkers that didn't keep moving and hit upon an idea, go even further north. He chuckled to himself, he'd always wanted to see the great lakes so he headed north. He traveled for days, and those days turned into weeks, maybe even months, he wasn't sure, but eventually he passed into Buffalo, NY, and a couple days later, he was at the edge of Lake Ontario. Surprisingly, he saw that Lake Ontario wasn't frozen over. He had heard that despite their immense size, the great lakes still froze over during winter. It was at this point that he hit upon another idea, find a boat, any boat, and live on the water. He could be out on the water, safe from walkers, he'd have an unlimited supply of fresh water, and he could fish and always have food.

Luckily, still being winter, most of the walkers in the area were almost entirely immobile. Occasionally one would be slowly moving, on some never-ending trek, following some long forgotten sight or sound, the friction heat of its movement keeping it just warm enough to not freeze solid, but most were basically frozen solid and no threat to anyone. Kenny searched for days, looking for any boat he might be able to salvage. After several days, he found a small yacht. Not very large as far as yachts go, only about 12 meters, but plenty enough for Kenny by himself. It had a cabin and a kitchen and all the comforts of a small home, perfect, with the exception of it being stuck in ice. While it's true Lake Ontario was only partially frozen over, the yacht that Kenny found was in a portion of the lake that was frozen. Still, it was a good find. Kenny could see unfrozen waters a few hundred feet away and after changing the oil and oil filter, cleaning out the fuel system, and replacing the battery, Kenny was able to get the yacht's engine running.

After a couple of days of carefully chipping away at ice around the yacht, it was free of the ice that immediately held it and Kenny was able to slowly make his way out to the heart of the lake, where the water was not frozen. Once on the open water, Kenny explored the unfrozen lake as much as he could. He found several boats of varying sizes adrift, some with walkers on them, others completely abandoned, but none with other people. Further north, on the Canadian side of the lake, the lake was largely unfrozen and Kenny was able to explore the shores around Toronto. After scavenging some fishing and camping gear from wrecked boats and houses, Kenny had all he need to live on a boat full time, and that's just what he did.

The ice thawed, the walkers began roaming again, and Kenny remained safe on his boat. He had all the food and water he'd ever need right at his fingertips. The only time he ever had to leave the boat was to find more fuel, or more fishing gear, or other items that would aid him in the basics of gathering and purifying food and water. Eventually the fuel ran out, or degraded to the point that the engines wouldn't work anymore and Kenny had to resort to sailing rather than motors, but he managed. Kenny continued this way for the remainder of his life. He never saw another human being and died 23 years after the dead began to rise, in his sleep, succumbing to a particularly bad flu virus.