I just got done watching a let's play on YouTube. 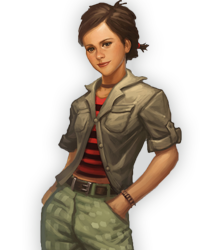 And I got to say, I can see way the game got a lot of flack for it's lackluster story. It was in noway a bad game. But the problems showed, like the lack of suspenseful danger. Why'll I was watching it, I never felt like anyone was in any real danger. Except at the very beginning of the game. I also didn't feel like I knew the characters well enough to care about them. To me they were just some random people that got stuck or trap on the inland. The characters didn't have enough back story, at lest that's what I saw.

And then there's the problem with the game bashing Jon Hammond. I liked him in Jurassic Park, he was a sweet and gentle old man. He mite have been a little bit over exited to open his park. I didn't think he was that hated by people. I basically saw my grandpa whan I saw Hammand and I couldn't have been the only one to feel this way. And the things that the scientist was complaining about, were the vary things Jon Hammond fought for in Jurassic Park 2 The Lost World. He wanted to let the dinosaurs live freely on the 2nd inland without human contact.