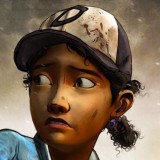 So, I recently downloaded some mods for my Left 4 Dead 2 game that replaced characters with people like Lee, Kenny, Carley and Chuck! Anyway, I had some seriously intense adventures. So, here's a story I created from my experiences. Oh, and I've obviously added some of my own stuff to make it more like a story. And also, Kenny has his eye-patch and Lee survived his bite/amputation. Weird, eh? So, yeah, this isn't really canon.

Lee just got into a fight with a seriously aggressive and fast walker in a burning factory. He's basically on his last legs, and he was slowing everyone down. He hated not being able to do much, especially as he only had one arm. Kenny selflessly gave Chuck the group's last bandages. It couldn't have been an easy decision; everyone needed healing. Lee was hurt the most, but the bandages they had wouldn't really help him much. His leg had a chunk torn out of it from a bad accident in the forest a few hours earlier. He wasn't looking too good, but he downed any pills the group came across, and he seemed to be doing alright.

"Thanks." muttered Chuck. He began to wrap a bandage around his torn up arm.

"Hey, guys, you ready to move? I hear some pretty bad sounds from the woods." said Carley.

"Yeah, sure, let's move." said Lee. He was badly injured. He was limping and breathing slowly. Behind Lee, Chuck shrugged and they all walked on.

The group approached a house standing out of a cliff on supports. They opened the door slowly. Kenny peered around with his one good eye.

The group walked in and everyone looked around. All of the shelves were empty, but the house wasn't silent. There were all sorts of groaning and gurgling noises coming from upstairs. Kenny got his crowbar ready.

They all got in a huddle and crept up the stairs of the house together. Once they got about 3 quarters of the way up, Kenny and Chuck could just about peer over the landing to see a fat walker sitting against the wall, breathing in and out. Various bubbles all over it's body popped, inflated and sighed.

"What the-" gasped Chuck.

The walker turned it's head. It must have had good hearing, despite it's poor form. It began to roll over onto it's belly, causing most of the bubbles on it's chest to burst. They were full of some vile substance that looked like puke. It slowly pushed itself up and it began shuffling towards them.

Carley's voice, "Holy shit, what do we-"

Kenny had panicked and thrown his crowbar straight into the walkers chest. It was a bad throw. The walker's eyes opened wide and half a second later the whole room was filled with a huge booming sound as well as the sound of flesh being torn apart. When the room had once again gone silent, everything nearby had been covered in the green, horrible smelling substance that came from the walker's now-exploded gut.

"What the fuck Kenny!" shouted Carley.

Just as he finished speaking the window at the landing smashed and five walkers came stumbling through into the house. Chuck pushed past Kenny and cleaved through one's head with his axe. The other four ignored Chuck completely and bounded down the stairs. The group swiftly moved to the sides and the group of walkers fell straight past and fell down the stairs, landing in a heap of flailing limbs and broken bones.

"RUN!" shouted Lee, Kenny and Carley, all together in perfect unison. Kenny and Carley quickly got to the top of the stairs, but Lee came up the rear, his multiple injuries slowing his progress.

"Through the window the walkers came in through!" shouted Chuck.

The group carefully moved through the spot where the window used to be. They were standing on a little balcony overlooking the railway track that passed the house. Off to their right, about 200 metres away across a long, rusting but sturdy railway bridge, was a light. An old train car, the perfect base. Kenny froze a bit upon seeing the train but he quickly looked away. Everyone looked down to the ground from the balcony. It looked like a fairly easy jump, except for Lee. Chuck was the first to climb over the railing that marked the edge of the balcony. He hopped down and landed with a thud on the floor. He moved forwards a bit and looked up at the rest. From the forest came a loud moan. There was a herd on the way. Carley was the next one to leap down. She stumbled but Chuck steadied her. Kenny looked at Lee.

"Just jump, you asshole." Lee replied. He patted Kenny on the back and grinned weakly.

Kenny climbed over the railing and jumped down. He turned and looked up at Lee. Chuck was looking over at the train car whilst Carley had her pistol trained on the forest. The ceaseless moaning was getting closer so that now the shuffling of feet could be heard.

"There's more than a few out there." said Carley, constantly watching the trees. Lee looked down at the ground.

"Hey, Lee, you've gone through worse than this. Just jump, I got you." said Kenny encouragingly. Lee climbed slowly over the railing and tried to prepare himself for a good landing, but he slipped and fell, landing on his damaged leg. He screamed and Kenny had to put his hand to Lee's mouth.

"Shut up!" shouted Chuck. Edging towards the bridge that led to safety in the form of a train car.

Then, the first faint silhouettes of the herd came stumbling and limping out of the bushes in the woods. Carley fired a shot right into one of the walker's foreheads, then she fired another one that took out the jaw of another. It kept advancing.

"We need to move!" she said loudly. She didn't sound at all scared. It was quite rare seeing fear in her face. Chuck lifted up his axe and took out a walker that tried to jump him from within a bush. Kenny had now helped Lee up and was supporting him on one side and shooting with a pistol on the other. Lee had just enough energy to take out his hatchet and wave it near any walkers that got too close. Adrenaline was beginning to get into his system, but as of right now he was in no shape to fight. By this time there were at least 30 walkers slowly advancing. They weren't going to be able to take them out.

Then, out of nowhere, a figure ran out onto the balcony and shouted. Carley turned and aimed her gun at the figure, but she wasn't quick enough. A long, slippery and slimy tongue shot out and wrapped around her arm. She was slowly being pulled back towards the balcony. Chuck ran to help her but about 3 metres away his foot got caught in a bush and he fell. He rapidly began tearing at the bush. The two of them were swearing.

Kenny and Lee were standing on the bridge, shooting walkers that were getting too close. Lee then noticed the predicament that Carley and Chuck were in and he pointed. Kenny followed Lee's finger and his eye went wide.

"Fuck, fuck, FUCK!" yelled Kenny. He dropped Lee, who fell to the floor with a grunt. He heard Kenny shout to him as he ran to Carley's aid. "Lee! Get...train!"

Lee just sat there and watched. He tried to grip his bleeding leg with his left arm, but once he realised there was no left arm to grab with, he just sighed. He had no gun, he couldn't move. He was just sat there, watching the whole scene play out. Kenny pulled out his pistol and fired a shot at the tongue holding Carley. A gaping hole appeared in it, but it didn't break. Another shot broke it, and Carley fell to the floor. The figure ran off back into the house, with it's tongue following it like a tail. Lee couldn't hear what was going on, but Carley nodded to Kenny and ran to Lee, helping him up.

"Kenny wants you to get to the train." Carley told him.

Lee shook his head but Carley was already quickly leading him to the carriage at the other end of the bridge.

Kenny was standing over Chuck firing shots at any walker that was nearing, while he still tried to tear away at the bush. At last, Chuck's leg came free and he quickly stood up, but he knocked into Kenny. He stumbled and dropped his gun, but he then reached for his crowbar.

"No time!" said Chuck, and he grabbed Kenny's arm, yanking him to the bridge. Lee and Carley were just about done getting into the carriage. Kenny shook Chuck's arm free, and pulled out his crowbar. A walker was almost ready to fall on top of him. Chuck stepped back. Kenny yelled and swung his crowbar wildly at the walker's head.

The walker fell onto Kenny. He yelled and pushed at the walker, but it just slid straight off. He'd killed it. He got up and began moving backwards towards the bridge, killing as many walker's as possible. Another one came out of the corner of his eye. He turned and swung his crowbar again. It grunted, but didn't die. It was gargling. Kenny shoved it onto the floor and took a huge swing to the side of it's head. Kenny jumped off of the walker's body. But then he froze and looked back. No Chuck.

"FUCK! Chuck, you sonuvabitch, where are you?!" he shouted.

He looked down at the walker he thought he'd killed. It tried one last time to get up, but it then fell over again, for the last time. Kenny stared at it and dropped his crowbar. He gasped and swore at the same time.

He slowly turned, looked at the end of the bridge. and ran to the carriage, waving his arms. Running towards the light, Kenny thought he'd died. Then, he saw Lee and Carley standing as silhouettes inside. He frowned. Lee and Carley just stared at the herd behind him.

Anyway, that was my fanfiction. As of yet, there's no title. I might redo the ending as it felt a bit rushed to me. If you have any feedback, I'd greatly appreciate it. I really enjoyed writing this. Thanks for reading!