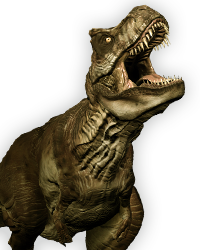 RexMaster
February 2011 edited February 2011 in Jurassic Park
Are we gonna get to see the great Brachiosaur anytime in the game Alan? Would you atleast confirm this, because I would kill for another scene like the pastural scene when Grant and Ellie realize where in the hell they are and what they are witnessing! God, that would complete any of the five episodes for me right there, just to see like one head pop up above the canopy of the Jurassic jungle!