Will Iman Avesta and Bruce Wayne have some potential romance? (Plot discussion thread) 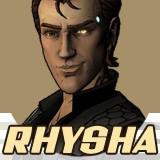 After the first episode of Season 2 of Batman The Enemy Within? There seems to be hints in this episode about Iman Avesta and her crush(I say crush cause it looks like she loves Batman)with Batman. I have a feeling that it's gonna be possible that she will learn Batman's identity and start question herself over it and maybe I don't know.

She might become potential romance option in this season soon and she will probably help cause after watching the episode I look at the choices of her and it shows that she likes that Batman stood up against Waller and it seems to hint that she might work and help Batman/Bruce Wayne.

I say this cause there might be a potential romance option for her in this season and finding out that Bruce Wayne is Batman and how she reacts is anyone's guess. Also Mods you can try to turn this into a better discussion on this if you want.

Just a friendly reminder, please try to keep discussion story oriented as you would in a normal thread. It makes for better discussion as opposed to "general chat" threads. Thanks.