Interactive Fanfiction: The Road Ahead. 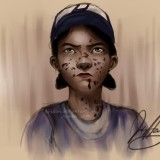 I know, I know. There's already dozens of Fanfic's on this forum already, but I thought I'd give it a shot to write one while we wait for Episode 4 & 5. WARNING: I'm not sure if this Fanfic will be good or not, I have a general idea for the beginning but as I go on I'll probably just wing it.

The story will be in the point of view of Rachel; a 20 year old studying architecture.
The setting will be in Texas, though the setting may or may not change eventually.

I'll eventually close submission box if it gets too full, but I doubt it will get filled

Characters waiting to be introduced:

I'll try to have your character introduced as soon as possible. Thank you for joining by the way!

Please write your characters name in every question you answer otherwise they wont be entered.